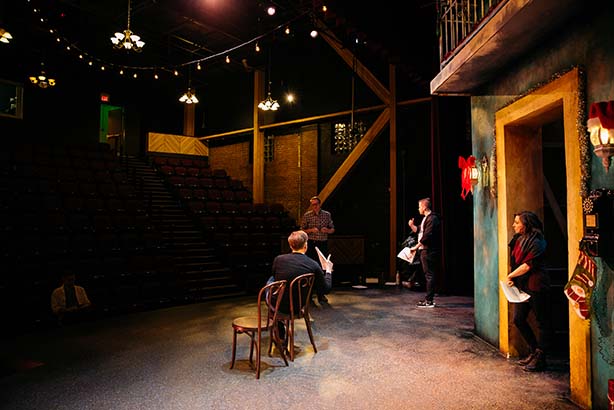 Old meets new in one of Edmonton’s theatrical landmarks.

It was an inconspicuous building: a former firehall turned arts hub that became a vital part of Edmonton’s thriving theatre scene. Located in the heart of Edmonton’s Old Strathcona neighbourhood, the Varscona Theatre has long been known as a place where local talent cut their chops, and where a rotating cast of Hollywood celebrities make cameo appearances. It was also the birthplace of the Edmonton International Fringe Festival.

But the Fringe was only one part of the Varscona’s appeal. In the 1990s, the Varscona grew to become one of the busiest venues in Canada, hosting more than 300 performances a year. But eventually, the theatre began to show its age.

“We’d have issues with everything from heating to plumbing problems and leaks. Eventually it came to a point where we had to recognize our building was reaching the end of its life cycle,” says John Hudson, artistic director of Shadow Theatre and a director of the Varscona. “It got to a point where the building was really holding us back.”
Despite its crumbling features, the venue hosted tens of thousands of visitors each year. For audiences and performers, there was a certain charm about the aging theatre’s cramped seating, miniscule lobby, and ever-failing amenities. Over the years, the theatre spent thousands on temporary fixes to keep staff, artists and patrons returning. Still, after years and generations of stop-gap fixes, it was clear they were reaching a breaking point. Rather than seeing the need as the end of an era, Hudson and the Varscona staff saw an opportunity.

“We wanted to bring something beautiful to Edmonton – something that would help our theatre companies and our arts community grow,” says Hudson. At first we just wanted to expand the lobby, but then as we realized what needed to be done, we knew we had to go for it. All of it.”

But the renovations would be no small feat. The theatre was an artist-run space, with multiple stakeholders and little funding to spare. But over the next twelve years, the community surrounding the theatre — including theatre companies, actors, directors and supporters — came together to make the renovations a reality. It took time to secure funding from municipal, provincial and federal sources, but eventually project plans inched closer to reality.

Remarkably, the project remained on time and on budget, opening to eager theatregoers after less than one year of construction. The impressive new space incorporates three brick walls from the old building but offers guests a warm and inviting atmosphere to enjoy both pre- and post-show. For performers, it also included improvements to backstage areas, complete with washroom and shower facilities. The renovation was a chance to not only strengthen the heart of the city’s vibrant theatre community, but to build stronger ties between the community members.

“Since the new space opened, we’re attracting bigger crowds and trying to find new ways to work together between the theatres to bring people in. We’re being more active on social media and we’re staying busy with preparations for our upcoming season,” says Hudson, now wearing his Shadow Theatre hat.

It doesn’t seem like attracting new patrons or filling the new, larger lobby will be a challenge. For some companies, like Shadow Theatre, ticket sales are up nearly 30 per cent since the new building opened. Thanks to the support of organizations like SEF, the final curtain call for the Varscona is still a long way off.