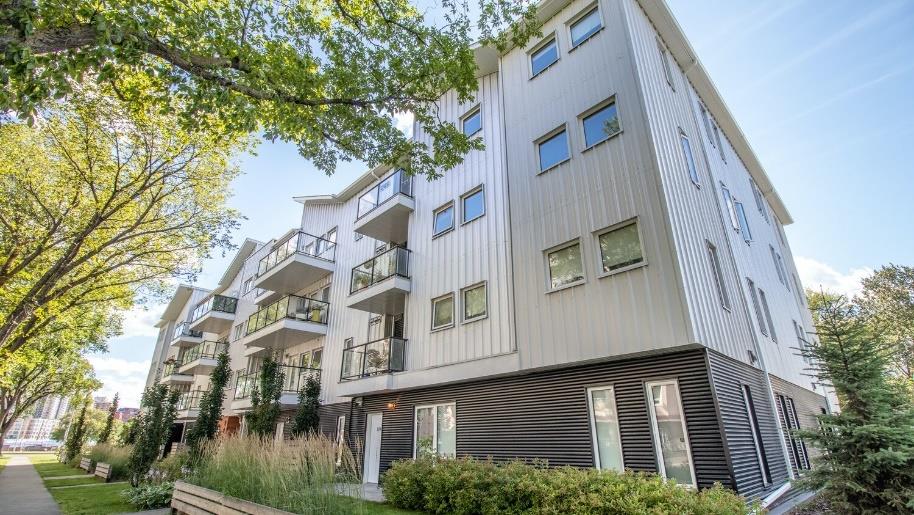 Over the past 15 years, the Jasper Place Wellness Centre’s social enterprises have touched the lives of thousands of Edmontonians. They’re showing no signs of slowing down.

An end to homelessness has always been central for the Jasper Place Wellness Centre (JPWC). And like many things they undertake to end the causes and effects of poverty in Edmonton — from Food4Good to Redemptive Developments — they’re willing to look at innovative, holistic solutions. So began a different approach to supportive housing.

JPWC’s first housing project, Canora Place, followed a traditional approach, but latest housing endeavors push the envelope. One of the first steps was the creation of Simitu, the construction and development arm of JPWC’s social enterprise, Redemptive Developments.

“When Canora Place was built, it followed the status quo of development. There were multiple lots brought together with one big building, and we followed all the current zoning bylaws and regulations at the time,” says Steve Hughes, head of Simitu. “And it’s this really beautiful apartment complex, but there are things that we knew we could change for future projects.”

While Canora Place was a ground-breaking project at the time it was built, Hughes and Murray Soroka, CEO of JPWC, recognized that elements of its design were added because of conventional thinking, adding little value to end users. What’s worse, some of these features, including the facility’s large parking lot, came with a high price tag.

“On that building, probably about 25% of the overall budget was on items that were of no value to the residents in the end,” says Hughes. “A lot of these conventional expenses were dictated by the thought process of, ‘Well, this is how you engineer a building, or this is just how things are done.’”

Never content to settle for the status quo, Hughes and Soroka vowed to do better with future builds. When talk of two new housing developments began, they knew things would have to be different. They began looking at different approaches used in multi-tenant housing units and found some inspiration in the Eden Alternative from the United States, a concept used in the construction of seniors’ residences. The approach was simple enough: rather than designing a building that put staffing and institutional needs first, to design a space that encouraged health and wellbeing above all.

“We started to look at how a space could be designed for residents to be a part of improving their own wellness, and not just rely on it in a traditional institutional way,” says Hughes. “As an example, if you were running a seniors’ continuing-care-type facility, in the past you’d look at having the best balance of nurses or staff to residents. But what this model tries to prove is that actually, if you have fewer residents together, they will form more of a family bond and look after each other to the extent that you actually don’t need as much institutional labor or support.”

“We hope our residents will spend most of their waking hours in these areas, where there’ll be a common TV lounge/living room, a large residential kitchen where they can interact with programming around food literacy and basic cooking skills. It’s about trying to create a space where over time residents will bond, and ideally we can expend less effort to create a sense of wellbeing and overall wellness for our residents,” says Hughes.

Although the idea itself was simple enough, building it would be another matter, as traditional zoning regulations required that developers follow a more conventional approach to any multi-unit dwellings. At the time, language in Edmonton’s zoning bylaw dictated that no more than three unrelated adults could live together in a dwelling, meaning that a twelve-person supportive housing facility was out of the question.

“I say this jokingly, but at the time, even the Golden Girls would’ve been outlawed in Edmonton,” laughs Hughes.

As a result, it took a little more than two years for JPWC to acquire the necessary development permits to get the Glenwood building launched. Now that construction is well underway, Hughes is confident that the initial time invested in this new approach will pay off in the long run.

“Unfortunately to make change, seldom do you take the short path,” says Hughes. “So far, our strategy is paying off. Our next stage is to prove that having 12 people living together under one roof is going to provide a better solution than having more than 12 live together in a more traditional setup.”

Over the coming years, JPWC aims to apply the Glenwood model in properties throughout the city. As of early 2022, the company has purchased an additional 6 properties, with plans in the works for at least six more across the city.

Following the success of Redemptive Developments’ employment model, Simitu offers employment opportunities to underemployed Edmontonians, in this case offering employment opportunities in construction and building maintenance across JPWC’s properties. Working in partnership with Women Building Futures, the company provides a safe environment for women entering the trades to gain skills and experience.

“We wanted to provide opportunities for women because there’s not as many as there should be in construction,” explains Hughes. “But the other aspect is that when the market gets hot—and eventually it will again—if you don’t have an approach like this in place, you run into problems. In Edmonton, that means you’re shutting out 52% of the applicant pool. So not only is Simitu focused on doing the right thing, it’s also just good business sense.”

These permanent supportive housing complexes are just some of JPWC’s most recent projects. The company also recently purchased and renovated Stadium Plaza, an affordable housing complex built in 2017. For the building’s previous owners, the apartment complex had been underperforming on revenues. Where they saw losses, JPWC saw an opportunity to diversify its housing portfolio while also creating jobs.

“We ended up doing quite a bit of maintenance work just to get it ready for our market, and we had our first intake of 12 women from Women Building Futures come through to work with Simitu on that project,” says Hughes.

Simitu—and the Stadium Plaza complex—build on JPWC’s legacy of providing wraparound supports to help Edmontonians move out of poverty. While some residents of JPWC’s permanent supportive housing complexes will need to remain there for months or years, others will be able to move up and out more quickly, into skills training and employment, as well as near-market housing options, like Stadium Plaza.

“Quite often, once you build stability around a person and help them get into supportive housing, things start to change,” explains Hughes. “Housing is the first step. Get a roof over their head and provide safety and stability, then you start to layer on supports and people will be accepting of help. Some will move rapidly, and some will move slower, but given the right support most people will be able to escape poverty.”

Regardless of how quickly or linearly JPWC community members move out of poverty, Hughes hopes Stadium Plaza will enable JPWC to support more residents for longer as they journey out of homelessness.

“It’s a way for us to support upward mobility in folks who are leaving homelessness. Over time, we are happy to see them move on, of course. We really do hope that they do end up in market housing, being independent and successful,” says Hughes.